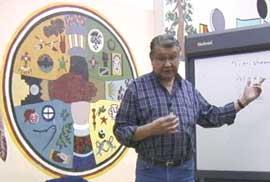 PIE is an ad-hoc group of Native educators who are organized under the guidance of Joe Rice, Executive Director of Na-way-ee Center School and Elaine Salinas, President of MIGIZI Communications. MIGIZI Communications is the fiscal agent for PIE. Membership consists of a small but growing group of Native educators and administrators, and allies, who work in the Phillips neighborhood, including:

As our membership list reflects, PIE is currently comprised of Native American educators and administrators. We would like to broaden the group to include elders, researchers, and students. The majority of us are stakeholders, with children, grandchildren, nieces and nephews being educated in the school systems that we are working to improve. The involvement of additional parents in this work is greatly welcomed. We are in the process of developing our outreach strategy and we anticipate that we will spend more time looking for elder and reservation involvement of both Ojibwe and Dakota Peoples.

In 2005, Minneapolis Native American educators and administrators in the Phillips neighborhood—who had been working in isolation at their various schools—began connecting to discuss the challenges and opportunities that we all face, whether at alternative, charter or public schools.

Native educators, parents and community members have long recognized the need for change in order to secure success for Native children, but past reform efforts and strategies do not seem appropriate for the challenges we face today with a school system that is in a panic because of declining enrollment and the pressures resulting from the No Child Left Behind mandates.

Historically, urban Native populations have embraced “survival schools” as a strategy to counter the dominant culture’s influence on our children. Survival schools emerged over three decades ago as part of a broad Native activist agenda that identified schools as a major institution of oppression.

Ten years ago, charter schools emerged as another tool for Native people wanting to make the teaching and learning process further autonomous from school district oversight. Creating our own schools and taking control over education offered us a rare chance to develop education systems that honor Native history, culture, and teaching practices and provide a shelter from the systemic de-culturalization of our children.

These survival schools, alternative and charter, have offered a significant way to reform education for Native youth, demonstrating the strength of culture as the basis for education. However, their impact and success is limited by economics and demographics. Most small schools cannot offer the variety of extracurricular programs and team sports that many Native youth want.

Alternative and charter schools face budget challenges that are forcing them to decrease some of their unique offerings, such as experiential education, field trips, culture and language classes, supportive services and personal attention that is possible with low teacher/student ratios. Many Native youth remain in mainstream educational systems while others choose alternatives or charters and the transfer rate between schools is very high.

A few Native educators who understood the need for a new kind of reform and believe we could offer guidance about how Native youth learn began reaching out to other Native teachers and administrators. This core group formed Phillips Indian Educators (PIE).“Everyone has a piece of the PIE,” says one of our members, noting that everyone has something to contribute and everyone has something to gain from participation.

Native survival school educators have expertise in cultural programming and flexible methods that work with Native youth; Native teachers and administrators within the mainstream school system have the resources to invest in Native learners and relationships with decision-makers throughout the system.